This new website is dedicated to the memory and vision of Oscar Winslow, who always strived to make the work of LACAA’s Board as transparent as possible and keep the members of LACAA fully informed.

Oscar Winslow was elected President of LACAA at one of the most turbulent times in our history. Back in 2007, LACAA was affiliated with SEIU, a leading member of the Coalition of City Unions, which was a conglomeration of six large public employee unions representing about 43,000 City workers paid out of the City’s General Fund. The Coalition had just negotiated with the City for Cost of Living increases of 25% over five years, which was meant to put General Fund workers’ salaries on par with those who worked at DWP. Two years into the deal, the Great Financial Crisis hit, and Mayor Villaraigosa immediately sought to reopen all the labor agreements in order to take the money back. The Coalition entered into new agreements with the City that benefited Union leadership but not employees, and dismissed us as a small union of professionals whose concerns didn’t matter. Members of LACAA recognized this and looked for leadership to take our union in a new, independent direction.

Despite the risks, Oscar Winslow stepped forward to chart a new path for LACAA, setting out on a mission to force the City to recognize the unique nature of the work performed by Deputy and Assistant City Attorneys and to show the City that it couldn’t impose illegal conditions on those whom had sworn to do justice on its behalf. By obtaining aggressive and independent legal counsel, Oscar lead LACAA in challenging the City’s unlawful imposition of furloughs and impairment of our vested pension benefits. The result of that challenge was a court ruling validating LACAA’s position that the City had illegally impaired our contract and affirming that LACAA members had a vested right to retiree healthcare payments. That ruling still resonates, nearly ten years later.

Under Oscar’s leadership, wages, benefits and working conditions for all LACAA members have greatly improved, and that leadership enables you and your dedicated colleagues to proudly serve the citizens of this City as the first tier professionals we are. Oscar, in conjunction with LACAA’s Board of Directors, spent the last ten years vigorously protecting your legal and contractual rights and ensuring that the City’s Elected officials and senior leadership respect LACAA and the special role our members play in the City family.

LACAA will forever be indebted to Oscar Winslow for his strong leadership and his dedication to all of its members. We are proud to uphold that legacy and carry it forward into the future. 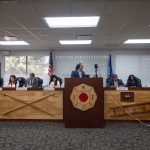 Answers to FAQ Regarding Personal Leave